A motion raised by Jackie Baillie MSP recognising the urgent need to tackle the gender gap in enterprise in Scotland was debated in the Chamber at the Scottish Parliament on Tuesday 15 November. Taking place during Global Entrepreneurship Week (14-18 November), the motion recognised the work of Women’s Enterprise Scotland in promoting and supporting women into business. It also raised the need for a gender-appropriate approach to enterprise and growth policies to meet the needs of women-led businesses.

Lynne Cadenhead, Chair of Women’s Enterprise Scotland said; “We are delighted that this motion has been debated in the Chamber during Global Entrepreneurship Week. There is no doubt that we are living in a time of global economic uncertainty and Scotland can no longer afford to allow to leave the talents and skills of enterprising women on the table.”

She continued; “It is time to address the ‘missing billions’. Research shows that if the rates of women-led business equalled those of men, the contribution to Scotland’s GVA would increase by £7.6 billion to £13 billion, representing a 5.4% growth in the Scottish economy. Set this against the fact that the Fraser of Allander Institute recently advised that entirely leaving the EU single market –a ‘hard Brexit’ – would see the Scottish economy decline by £8bn within a decade. The time for action with regards to improving the landscape for women in enterprise is now.”

In a further development, the Scottish Government for Employability and Training, Jamie Hepburn MSP, has announced funding of £200,000 for projects to support more women into business and tackle the gender gap. Women’s Enterprise Scotland will benefit from a share of the funding to deliver the internationally recognised Women in Enterprise Ambassadors Programme. WES will also work with partners across the enterprise networks to deliver a report on international best practice towards tackling the gender gap within enterprise support.

Jackie Baillie commented; “Only 1% of large businesses in Scotland are led by women and the number leading small to medium sized enterprises has dropped from 22% to 20%. We can and must do so much better than this. We need a step change in effort if we are to create opportunities to grow women’s enterprises and unlock the potential that is there. Women’s Enterprise Scotland has ensured that Scotland is leading Europe on a best practice approach to women’s enterprise. The Scottish Government should work with them to create that step change.”

Jamie Hepburn, Minister for Employability and Training, said; “This government is committed to closing the gender gap in enterprise which is why I am delighted to be participating in this Cross Party Group on Women in Enterprise. The Women in Enterprise CAN DO Ambassador Programme, delivered by Women’s Enterprise Scotland, offers aspiring business women a fantastic opportunity to learn from their peers. The benefits of the programme go beyond the direct help it provides to individuals. It is one of the ways in which the Scottish Government is showing that we are serious about entrepreneurship for all and that we want Scotland to lead the world in supporting and creating new businesses.”

Convenor of the Cross Party Group on Women’s Enterprise, Gillian Martin MSP said; “As a former businesswoman myself, being convenor of the new Cross Party Group on Women in Enterprise is hugely important to me. Just a week after being constituted, we have drawn attention to the gender enterprise gap, played host to the wives and partners of servicemen from 2SCOTS who have just completed the first WES Business Creation Course at Glencorse Barracks, heard from women business leaders acting as mentors and facilitated a members’ debate in the Scottish Parliament on women in enterprise. I hope these actions inspire more women to look seriously at the enterprise route.”

She continued; “It is vital that women in business get the gender appropriate support they need within an enterprise ecosystem which encourages all businesses to thrive and contribute to the economy. Women entrepreneurs can provide inspiration to girls growing up today, as they contemplate their future and see a landscape in which anything is possible for them.”

As well as the Parliamentary motion, a team of Women’s Enterprise Scotland Ambassadors took part in training on giving evidence to parliamentary committees. They also spoke to MSPs at the invitation of the newly-established Cross Party Group on Women in Enterprise. The Ambassadors were joined at the Cross Party Group by a team of attendees from a recent Business Creation Course for servicemen and women’s wives and partners, funded by the Armed Forces Covenant Fund and run by Women’s Enterprise Scotland at Scots Corner Community Centre near Glencorse Barracks in Penicuik. The course was visited last month by Keith Brown MSP, Cabinet Secretary for the Economy, Jobs and Fair Work and has seen a number of new businesses already launching and trading.

Lynne Cadenhead concluded; “The motion raised by Jackie Baillie MSP received a huge amount of cross-party support. It raised the issue that women are still being held back by gender-blind policy making in economic development and that we need to take meaningful and urgent action to unlock the economic potential of women in Scotland. As a nation, we need to live up to our reputation for innovation and entrepreneurialism by creating an environment where women-led business can flourish, succeed and contribute to the wider economy.” 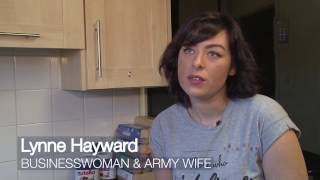